MSU Alumni Bill and Carol Mechanic have created a scholarship fund for students majoring in Film Studies at Michigan State University. Award decisions are made each spring, and funds are distributed the following fall.

The scholarship fund has been given in loving honor and memory of Bill and Carol Mechanic’s parents—Jack and Anita Mechanic, June and Larry Silverman and Gary and Nora Whitener, who strove to excel in whatever opportunity or challenge they faced. Scholarships are offered to those students who love the art of film and exemplify the great Midwestern values of hard work and persistence, to foster learning, achievement and a path to a better world.

Eligibility: major in Film Studies, with priority given to students with financial needs who are from Wayne, Oakland, or Macomb counties.

For further information and to apply: contact the Director of Film Studies, Professor Joshua Yumibe, yumibe@msu.edu. Please note in your email your major, your year, and the state and county of your home residency.

Carol Mechanic has worked as senior vice president of programming at Showtime, as well as at HBO and on numerous film and television productions. She is from Royal Oak and graduated MSU in 1973. Open to majors and minors in Film Studies and to minors in Fiction Filmmaking and in Documentary Production.

Laurence Allen Tate (1945–2008) earned a B.A. in English from Michigan State University, where he was co-founder and assistant editor for the weekly student publication, The Paper. After graduation, Tate moved to the San Francisco area and was involved in the Gay Men’s Health Collective of the Berkeley Free Clinic and San Francisco’s HIV/AIDs hotline service, Project Inform, from 1989-1993. He later moved to Washington D.C. to work at the National HIV/AIDS Prevention Program at the U.S. Conference of Mayors. Known early for his film criticism and anti-war essays, he wrote and spoke primarily about AIDS-related issues and the experience of being gay in America after 1981. A member of the Cherokee Nation, he was a member of Native Americans in Philanthropy, and a former member of the board of the National Native American AIDS Prevention Center. 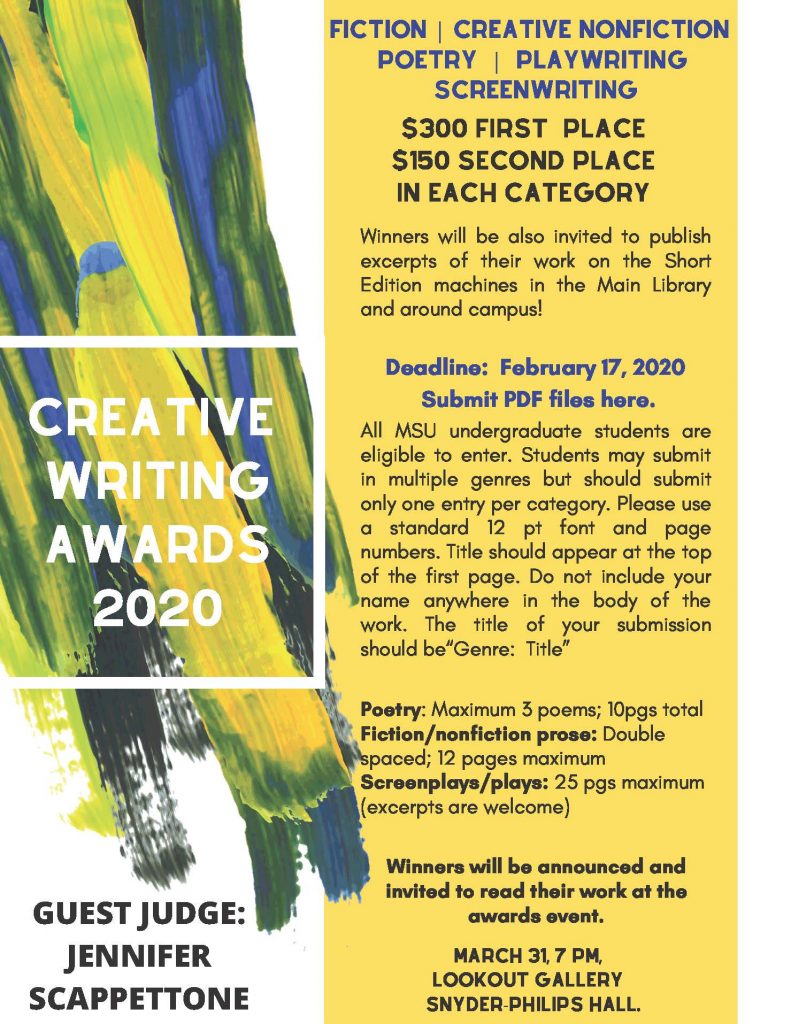 The Department of English sponsors an annual contest for the best original work in poetry, fiction, nonfiction, screenwriting, and playwriting.  The guest judge for 2020-2020 is poet Jennifer Scappettone.  Students may submit here.

Please read all these FAQs before submitting.  If you STILL have questions email msucw@msu.edu